And Senor “there were only 261 murders in Tijuana” Rogelio Delgado Neri, who was shot dead (along with his three bodyguards) by men who burst into that Tijuana bar and scared the Gringo-tourists back to Omaha was also whacked by ZETAS.

So now we have The Cartel having its own tactical military force operating against the government of Mexico itself. It is now real army against real army and they all went to the same military schools. Yes, and The Cartel’s Army is as well trained as the Mexican Army and you know that it is far better paid. 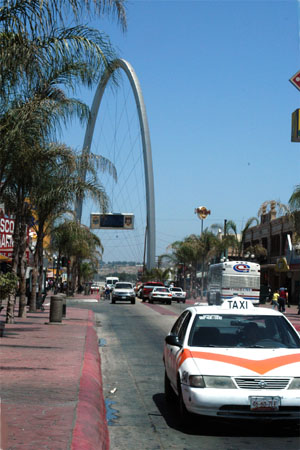 The US / Mexican border has become a far more dangerous because the drug shipments are now protected by well armed, well trained Mexican Army Deserters.

As with the easy-to-bomb-from-the-sky Taliban versus never-to-be-found al Qaeda, isolated extremely violent “mini-cartel” cells are also taking over parts of the drug business in Tijuana and elsewhere. These smaller organizations will be harder to fight, more violent, more flexible and far less visible.

Avenida Revolucion is Tijuana’s hotbed of bars and babes. Tourists better mind their step. Fire hydrants can be anywhere, including right in the center of the sidewalk.

Even the most obtuse American tourist from Omaha visiting Tijuana for the first time while attending a San Diego multi-level marketing seminar on non-ephedrine based diet products can spot the odd caravans of black SUVs sprouting antennae and so heavily laden that the sidewalks shake as they rumble past. The local authorities are oblivious.