One place where they still occur is in the huge concrete lined flood control channel which splits Tijuana into two pieces. Miscreants will make some effort to escape the Tijuana authorities and head for the border. 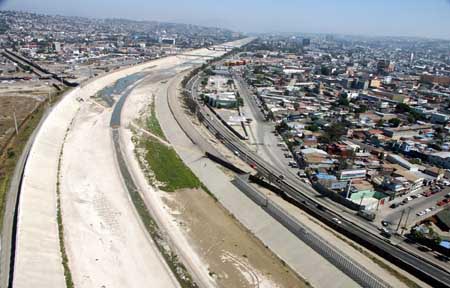 These individuals will even drive their cars at high speed right up the middle of the flood control channel with the authorities in hot pursuit.

The U.S. Border Patrol placed concrete barriers across the flood control channel right along the yellow line which demarcates the border to stop these northward bound adventures.

Tijuana consists of a paved core which is surrounded by barren barrios. The murder rate in Tijuana is certainly not more than about 500 per year (San Diego, California has a murder rate of less than 100 per year). Of course, when is a body count an actual body count? This is the number of people discovered on the street, in cars, in houses, or mysteriously plopped at Tijuana’s city dump within a dozen miles or so of city center. The 500 does not include the vast numbers of “others” who find their way into shallow graves scattered across the 10,000 square miles of desert sands from Tijuana to the Sea of Cortez.

For example, six people were dragged from a house in the Colonia of Guaycura and their bodies were later found scattered in isolated areas near Tecate and Ensenada. In the Colonia of El Sauzal, 19 people were ripped from their beds and then lined up and machine gunned.

The city of Tijuana actually has a murder count nearly equal to that of all Western Europe combined. The recent political situation in Iraq averages 560 deceased Americans per year which is about Tijuana’s score.

There do seem to be certain issues with the Tijuana Police and all have been disarmed. Mexico has moved Federal Troops into the city and all 2,300 Tijuana Police Department weapons are being forensically examined to attach “dead body” with a “police weapon.”

Unlike Nuevo Laredo, Mexican Army tanks have not as yet encircled the town.

In Tijuana there are, on average, ten mysterious events each year where policemen have somehow ended their lives. This tragic situation includes the unfortunate end of Federico Benitez Lopez, the Tijuana Chief of Police. It is only a rumor but some speculate that the approximately 54 bullet holes in his body were simply an accidental discharge of his personal revolver when his car was callously bumped at a stop light.