The city is blessed with no real shopping centers or other encumbrances to your transit, so a quick exit is assured. One favorite pastime for residents seems to be visiting gun shows and even they must be held some 30 miles to the north. Do you need a gun here? Well … 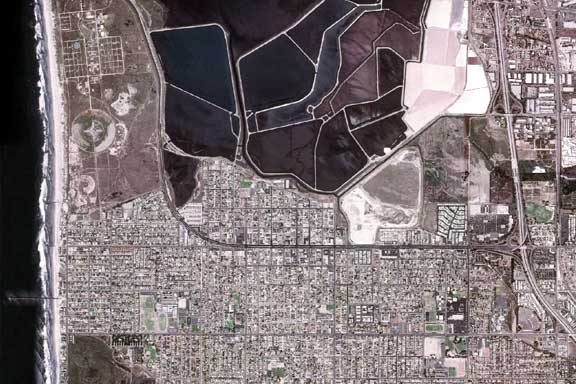 A satellite photo of “IB. The Place To Be!” The dark horizontal line is Palm Avenue.

While one might think that a place with a name like Imperial Beach would have a wonderful beach … The city’s own material states: “It’s not something any chamber of commerce would want to publicize, but Imperial Beach has to live with this unfortunate fact: Sometimes the ocean is so polluted by sewage that the beaches have to be closed.”

Of course, the source of this virulent fluid is a complete mystery to the Imperial Beach City Council. You know where it is coming from. An eight year old girl going for her Brownie “Earth Connections” (it used to be called “Ecology”) patch, who dug a three inch hole in the ground at the entrance to the Border Field State Park and went into spasms knows where it is coming from.

But the City of Imperial Beach has (as one would imagine having visited this site) found nearly a million dollars of taxpayer money for a two year study to seek out the source of this mysterious (but quite virulent) liquid.

The government employee partly responsible for this research effort hopes to make this “a long term commitment,” and “a model for all to follow.” What that means is “half a million taxpayer dollars a year for the rest of his natural life.”