Of course, the myriad detritus of Tijuana life includes paper products and bits of colored plastic sheeting. Much of this is even caught on the evening breeze and floats into the riparian foliage becoming a form of gloriously perennial Christmas ornamentation.

As we drive forward we find to our far left a 100 million dollar plant for the processing of 15 million gallons of Mexican sewage a day. This is the South Bay Water Reclamation Plant. The plant was built many years ago and produces tons of sludge which can be called “reduction.” A bit farther on, and again to our left, is a 400 million dollar plantfor processing another 25 million gallons of Mexican sewage a day and this one creates even more tons of “reduction. “

Certainly, Tijuana has its own “factory” for the reduction of this liquid. The San Antonio de los Buenos plant six miles south of the border bubbles onwards but this is the land of Romantic Mexico and Manana and so the easy life means much of their liquid is dumped raw directly into the sea.

Recycling is paramount in the future of the Tijuana River Estuary and Border Field State Park. Here, on these lands, these sparkling factories glean valuable biological essences from the liquids flowing north from Mexico and they convert them into tons of golden brown product.

While Mexico could have constructed these facilities, nearly $500,000,000 of America’s treasure was invested here to make certain that we would own the refined essence.

All of these diverse and semi-processed streams are then carried by a single underground pipe 11 feet in diameter (called the “SBOO”, or South Bay Ocean Outfall) to a place more than three miles offshore and released at a depth of about 100 ft. so as to provide nutrients to the lobsters and other delicious produce soon to be at our dinner table. It may be interesting to note that the gentle Pacific Ocean tries to refuse these mega-gallon gifts. Megawatts of electricity must be dedicated to pumping the flow — injecting it forcefully into the depths of sea. The “SBOO” is even provided with a separate boost pump station which is, appropriately, right at the entrance to Border Field State Park. 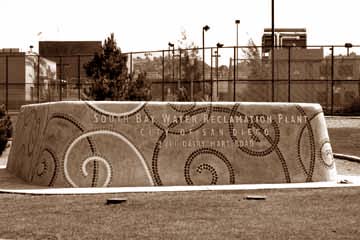