Yes, the first viewing point of photographic interest on your approach to the estuary and park is the large San Diego County funded beige monument to the Tijuana River Valley Regional Park. It may not be by accident that the color of the monument matches the colors of the rich and diverse waters flowing past. 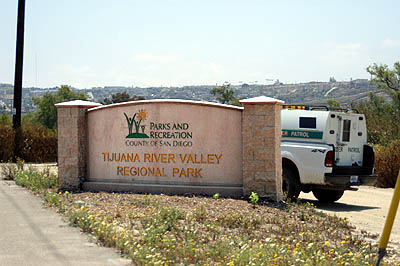 The “taxi” usually parked behind the monument is there for your safety but it will only take you south and to a federal facility. 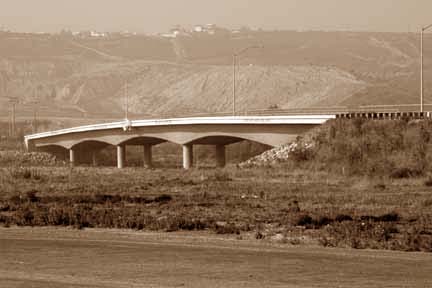 The second viewing point of interest on our way to the distant sea, is the grand bridge which can be considered the formal gateway to the lands of the estuary and park. At a cost of about 138 million dollars, the Danny R. Marschall Bridge.

It’s a mystery why Mr. Marschall sued the City of San Diego and won, but he did and the settlement he received probably did not go into the construction of this bridge.

To the left are small agricultural fields and a view of the distant Tijuana flood control channel. To the right as we cross the bridge we can see vast mounds of valuable recyclable resources just waiting for an entrepreneurial free spirit.

Viewing the area from the bridge one discovers that these recyclables reach even twenty feet into the dusty sky. All are a product of the vibrant economy of Tijuana, Mexico. Plastic bottles, cartons, even full sized refrigerators all are gloriously stacked one upon the other in myriad shapes and forms well worth recognition from the Tate Art Gallery in London. 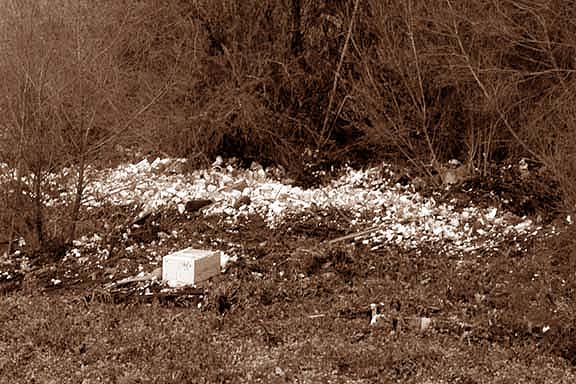